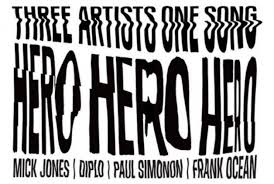 Footwear and music might not immediately come to mind as a classic partnership, but sneakers have embedded themselves in hip hop culture at least since the 1970s, and became a prolific statement of self expression for that genre in the 80s and 90s. So perhaps it’s not that strange to hear that Converse has a music arm, and a “Three Artists, One Song” series. This brings together three artists from different genres, funnily enough, to create a track available to the public for free. Fear not, for those of you concerned with the artists getting their just rewards – despite the rest of us being gifted with a free track, Converse assures us the artists are paid for their hard work. Since this series first began in 2008 with Pharrell, Santigold and Julian Casablancas from The Strokes coming together to create “My Drive Thru”, we’ve also seen collaborations between Gorillaz, James Murphy, and André 3000 (“Do Ya Thing”); as well as between Bethany Cosentino from Best Coast, Vampire Weekend’s Rostam Batmanglij, and Kid Cudi (“All Summer”) to name a few.

This latest instalment in that series is the seemingly unlikely collaboration between Frank Ocean, Diplo and two members of the Clash, lead guitarist Mick Jones and bassist Paul Simonom. Yes, those names do add up to four people, but it seems “The Clash” is considered one entity, to avoid rebranding the series. Diplo, Jones and Simonom spent four days in London coming up with five different tracks, from which Frank Ocean selected the final track and added his vocal track remotely from Los Angeles. Three months of work later and we have the finished product here. Although you might not have guessed it from his work as a producer, Diplo is apparently a long time fan and admirer of The Clash (although evidence of this is his sampling of their track “Straight to Hell” on MIA’s hit “Paper Planes”).

So what does a Frank Ocean – Diplo – The Clash collaboration sound like? A little bit soul, a hint of electronic/dance beats, a bit of a garage punk rock vibe to it, and all tightly produced together. “Hero” smoothly moves between a really laid back almost-soul feel, before we’re hit with driving guitar and drum rhythms. The addition of the West Los Angeles Children’s Choir adds a nice community feel to this idyllic, sunny Sunday drive tune. You can watch their behind-the-scenes video where Diplo, Jones, and Simonoms talk a bit about how they came to this track.

Have a listen for yourself and let us know what you think. As Converse have happily given this track away for free, snap up that free download below!