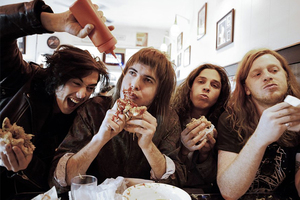 Sticky Fingers’ fans are young and ready to party, and this was the exact atmosphere completely permeating The Corner Hotel on Sticky Fingers’ 2nd Melbourne show for their Gold Snafu Tour.

The band had certainly strived to entertain in terms of their wardrobe and styling choices. It was all hair, bucket hats, and half-nakedness on stage. The stand out was definitely keyboardist Freddie Fish who had nothing on but short shorts and a bucket hat, but bass player Paddy Fingers came a close second with his very impressive mullet. It was sometimes easy to forget that the show wasn’t at a big outdoor festival, but in the confines of a dimly lit indoor music venue. During the opening song, a crowd surf occurred within the first 30 seconds, and this set the scene for the rest of the night – it was crowd surf after crowd surf and everyone on shoulders. At times, the audience itself was just as entertaining to watch as the band on stage.

They dropped song of the moment “Gold Snafu” right in the middle of their set and the entire crowd sung all the lyrics to this song that’s only been out for a month. The band has clearly picked up a whole load of new fans through this more pop-inspired and joyful tune. But the song everyone had been waiting for was towards the end of their set. The band very slowly started playing the first few lines of the single that started it all, “Caress Your Soul”, inciting a huge amount of fervour when the audience caught onto the song. As an encore, they performed “How To Fly” and finished with laid-back tune “Australia Street”.

Though there was minimal crowd interaction throughout their set, what was most impressive was the actual talent on display. Their live music was just as polished as their studio recordings and lead singer Dylan Frost has an amazingly emotive voice. Performing within such a niche and unique mash-up genre of psychedelic-indie-pop-dub, yet still with such a knack of writing a variety of music, catchy hooks and attracting a huge amount of young fans, Sticky Fingers should be set to stick around for awhile yet. The band members and their music perfectly captures the youth mentality with themes of friends, partying, and young love, and you can certainly see this reflected in their fans and their enthusiasm.

An edited version of this article was first published on SYN Reviews.